I thought it might be interesting for you to hear Rick preaching in Ukraine with a translator.  Sergei Golovin sent me this link:   https://www.youtube.com/watch?v=ignpDhdxLtA&feature=youtu.be

Those of you who have computer access and wish to do so can check it out.  I couldn’t get the music to come through, but if you move forward a little after you get the link opened, you can see and hear Rick and hear his translator.  (I was hoping to hear the music too, but even though it shows the worship team, there was no sound with it, at least that I could get.) 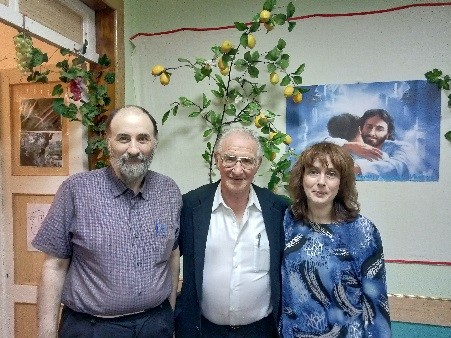 Zhenya Molodchy wrote the following in his recent newsletter:

“…The week Rick was in Kharkiv was very packed.  We had speaking appointments at the “Beginning of Wisdom School”, churches, rehabilitation centers, and small groups.  We did not have much time, so we had to schedule one particular meeting two hours before the departure of Rick’s train to Kiev.  I am so glad that meeting happened because we met with Sergey and Yulia Smolenskiy, with whom we have been working for about 10 years…..”  Please pray for them to become committed followers of Jesus.

An Interesting Note from Rick

“When Vitaliy Sorokun introduced me to the New Hope Church before I preached and had the seminar, he told them that he recently read ‘More Than Conquerors in Cultural Clashes’ – and loved it!  He especially likes the fifth chapter, ‘Passion for Purity’ – and he exhorted the congregation to develop a passion for purity (and to read the book).  Praise God!”

“I just wanted to tell you how much we enjoyed Rick’s visit to see us last week!  It was SUCH a blessing, and we were delighted to get caught up a bit, show him and the Golovins around Ternopil, and we got to take him to the property where we are building our house! 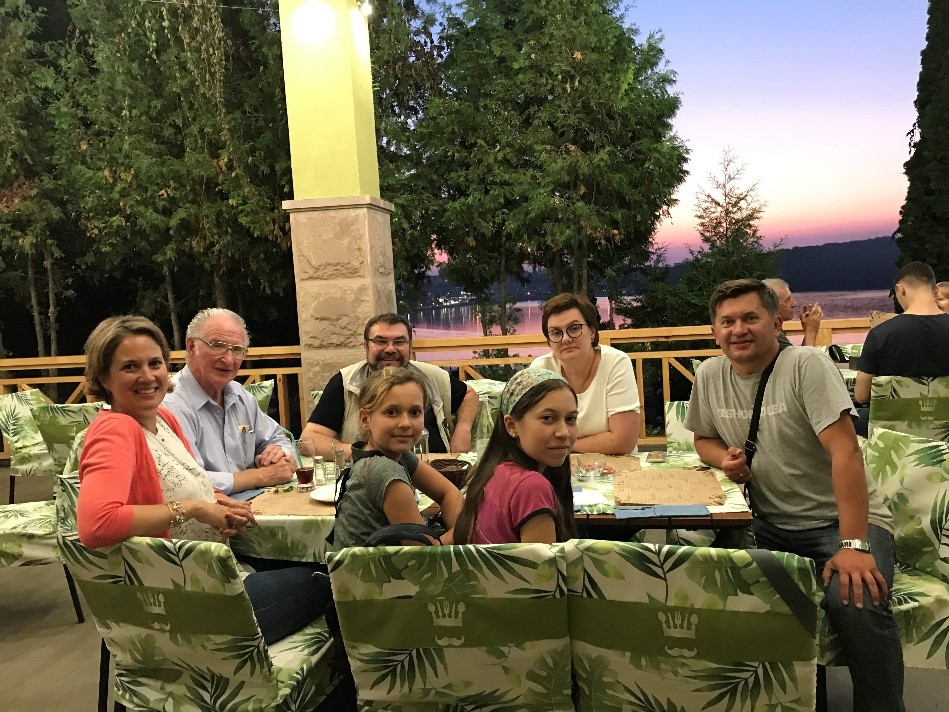 As always he was such an encouragement!  Thank you also for the financial blessing he left for us, so timely and appreciated!

We look forward to seeing you next summer when we will be in the States for our furlough!

Love to you all,

Teaching at YWAM in Kiev

This is the group that Katie Hartrampf, a young lady from

here in Idaho, is working with.

However, she was unable to attend the day Rick taught there because she was ill. 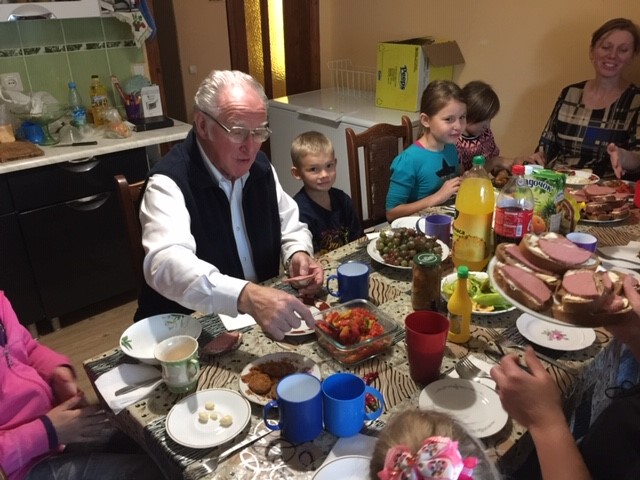 Rick is on his way to Odessa at 11:00 pm. Ukraine time. It was a blessing to have your

husband with us this week.

I recently read an account of a writer’s conference – back in the days before computers, when typewriters were still used.  The woman who wrote the story told about a well-known author who sat down at the typewriter next to her.  After he put a sheet of paper in the typewriter, he just sat there looking at the paper, as if he couldn’t think what to write.  Finally she said to him, “Stop staring at the white space.”  He briefly glanced at her with a bit of a smile – then he continued to look at the paper in front of him.  A little while later, he began to type.

The next morning, this same man taught a class at the conference.  He explained that whenever he sat down to write, he always prayed before typing a single letter.  Then he told the class that he even had these words taped to his typewriter:  “Pray before using.”

Wow!  That made me think, “What a difference that would make if all of us used that guideline for everything!”

Which reminds me…..Rick and I are very grateful for all of you who pray for both of us when Rick is gone on one of these mission trips.  We know that those prayers make a difference and we thank you!!!

For some unknown reason, sometimes the postal system returns to the sender, mail that has been sent to us, saying it is undeliverable.  We have asked about this at the post office, but they cannot give us an answer about why it is happening.  They have assured us that our names and “Overseas Outreach” are all included on the side of the P. O. Box where the mail is sorted.  We are sorry if you have had to deal with this inconvenience.

So, if yours is returned, please try sending it again.  We are still here, we still have the same P. O. Box number, and the fees are paid up to date.  Thank you!

Rick had written the following to share in an earlier prayer letter, but ran out of room, so he asked me to share it this month.

“I would much rather say that every time you make a choice you are turning the central part of you, the part of you that chooses, into something a little different from what it was before.  And taking your life as a whole, with all your innumerable choices, all your life long, you are slowly turning this central thing either into a heavenly creature or into a hellish creature:  either into a creature that is in harmony with God, and with other creatures, and with itself, or else into one that is in a state of war and hatred with God and with its fellow-creatures, and with itself.  To be the one kind of creature is heaven:  that is, it is joy and peace and knowledge and power.  To be the other means madness, horror, idiocy, rage, impotence, and eternal loneliness.  Each of us at this moment is progressing to the one state or the other.”   –  C. S. Lewis, p.92,  “Mere Christianity”.

“Truth will ultimately prevail where there are pains taken to bring it to light.” – George Washington.

Let’s pray and each do our part to bring truth to light!

Steven Lawson of Ligonier has pertinent and potent comments for us to consider about the gospel:

The gospel can never be a side issue in our lives.  That should not be a radical thought, but in the modern church it too often is.  We see too many churches trusting in programs and appeals to the culture in order to fill pews, hoping to win people to Jesus by entertaining them.  Others focus on what is trendy at the moment, preaching a worldly message to win the favor of the world.  Good intentions usually motivate such efforts, but they are doomed to fail and to produce no lasting spiritual fruit.  Why?  Because God does not put His power there.

No, the power of God unto salvation is the gospel (Rom. 1:16-17).  As Paul tells us in Romans 1:1, the gospel is ‘the gospel of God.’  It is not merely a gospel about God – though it is that – but it is a gospel that belongs to God.  The gospel is authored by Him, empowered by Him, blessed by Him, and used by Him to save a people for His own glory.

Because it is God’s gospel, it possesses many of the same qualities as God Himself.  It is an authoritative gospel, carrying the very authority of our Creator.  It is a powerful gospel, attended by His Holy Spirit to convert all whom He chooses.  It is a gracious gospel, born from the mercy of the Lord to undeserving sinners.

Our responsibility is to be faithful stewards of the gospel, to take it as it is revealed in Scripture and to proclaim it to others without changing it.  I believe we are called to steward this gospel wherever God has placed us and to support others who are faithful in this ministry.”

~ From Steven Lawson of Ligonier Ministries

“Walk in wisdom toward outsiders, making the best use of the time. Let your speech always be gracious, seasoned with salt, so that you may know how you ought to answer each person.” Colossians 4:5-6 (ESV)

“And the Lord’s servant must not be quarrelsome but kind to everyone, able to teach, patiently enduring evil, correcting his opponents with gentleness. God may perhaps grant them repentance leading to a knowledge of the truth, and they may come to their senses and escape from the snare of the devil, after being captured by him to do his will.” 2 Timothy 2:24-26 (ESV)

“The upcoming midterm election is critical. Imagine the impact liberals would have on America if they gained control of either or both chambers of Congress? As people of faith, we can have a tremendous impact on the future of our nation if we only vote and vote wisely.”

This morning as I was sitting in my chair, reading from my devotional book, I read these words of an old favorite hymn by George Bennard:

“Oh that old rugged cross so despised by the world

Has a wondrous attraction for me;

For the dear Lamb of God left His glory above

To bear it to dark Calvary.”

I looked across the room to some pictures we have on the wall, 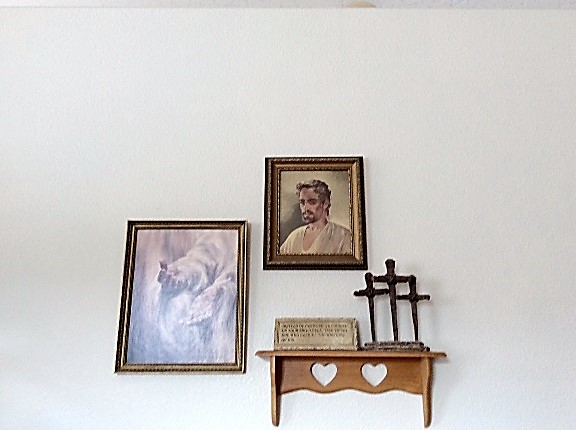 and my eyes filled with tears as the following prayer welled up in me.   “Lord, help me to live my life in such a way that You will know my 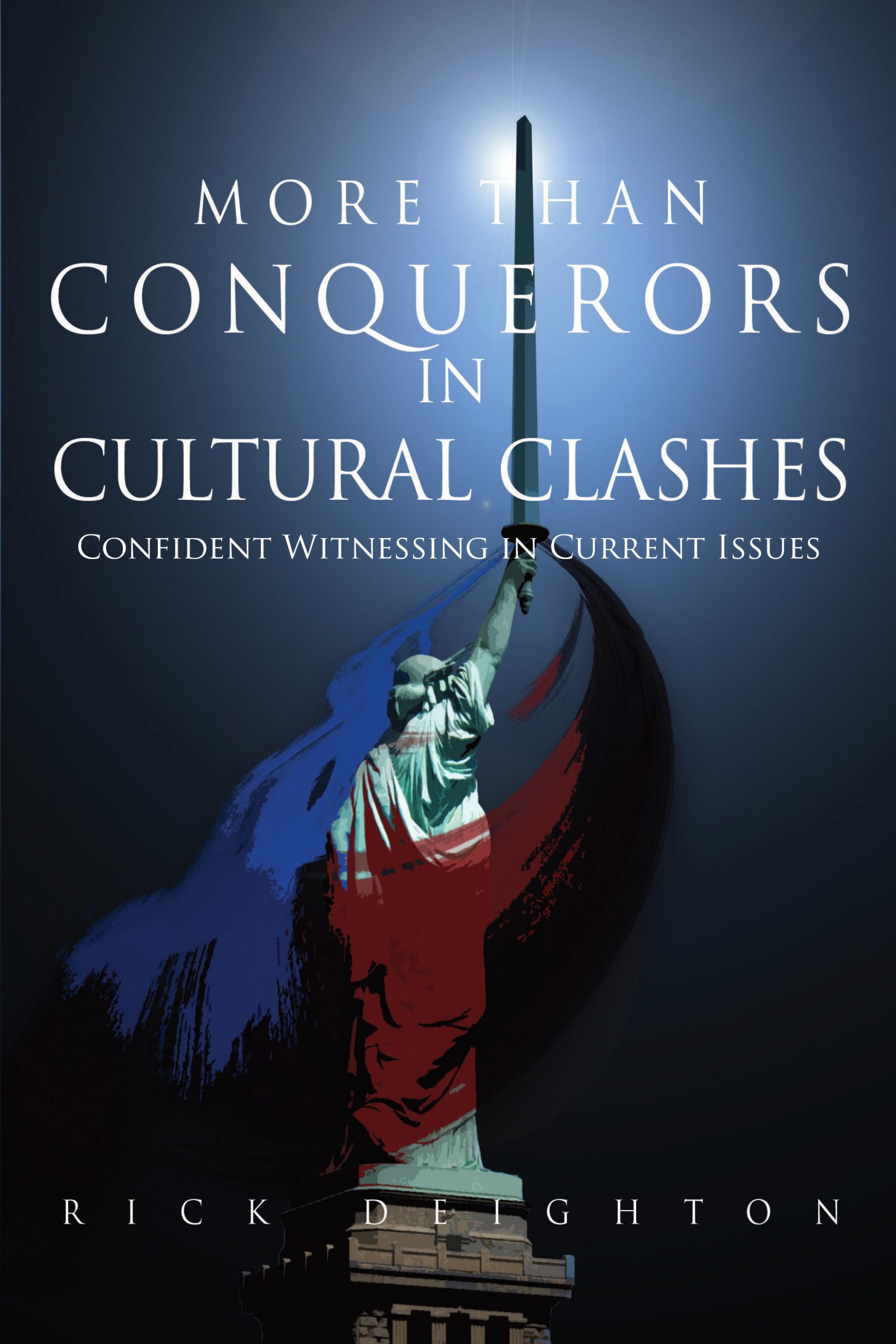